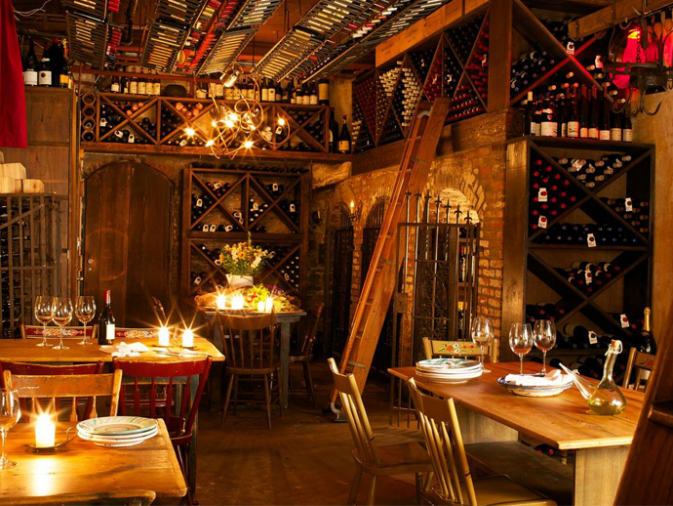 When you decide to go out to dinner, you may also want to entertain yourself while you eat. But in some establishments, the entertainment is not just music, dance, televisions above the bar, singers or pianists. It is of the paranormal type, through spirits that have made the place their home.

If you like this kind of thing, or are intrigued by the possibility of seeing a ghost or witnessing some kind of mysterious event , you can visit a series of restaurants believed to be haunted but still open to the public.

Some restaurants they make the most of the tales and history, offering ghost tours while you wait for your food. Others simply delight in having visitors come in and ask questions about the history and reports of ghost sightings.

Do you want a scare? While there is no guarantee that a spirit that lives there will come out when you visit, here are 10 restaurants haunted where you can eat.

New Orleans is considered one of the most haunted cities in the US, period, so it is fitting that a restaurant from this list is there. According to legend, the former owner, Pierre Antoine Lepardi Jourdan, committed suicide there after losing his house on a bet. Now his spirit haunts the place.

El restaurant, which is right off Bourbon Street, is multi-tiered, giving the ghost plenty of room to roam. For regular paying customers, you can enjoy the kitchen traditional Creole, jazz brunch and explore the charming decorated rooms, including the Séance lounges. But keep in mind that you may have a strange feeling when entering.

Travel to Hoboken for happy hour at this restaurant, which is over a century old, and apparently has a couple of ghosts living there who don't seem to know when it's closing time.

It may interest you:  Do you want to know what are the most expensive dishes, drinks and desserts in the world?

According to the story, in 1904, a future bride fell down the spiral staircase and broke her neck. Her fiancé, unable to cope with the loss, hanged himself in the upstairs area, which is now a separate dining room. It seems that the wedding they never had could be happening in the afterlife, as several guests and employees also swear that they have seen apparitions seemingly in wedding attire coming down the stairs.

Eat here and you might see the former owner of the Victorian home that was built in 1891 and turned into a restaurant back in the 70s, along with the neighborhood dog who loved to hang out on the porch of the restaurant and carry food scraps. His name was Poogan.

The woman was reportedly a school teacher who never married and, after her death, apparently still did not want to leave the comfort of her home. Meanwhile, Poogan sadly passed away in 1979, but his spirit is also believed to be present. It is your porch, after all.

It is wonderful that guests dare to go here, much less that the owners can find staff willing to accept jobs. The spirits in this restaurant are supposedly unhappy, as people have reported everything from crockery flying against the walls, to thrown food, ghost sightings, and even physical contact, such as something pulling on a ponytail.

Many paranormal investigations are have been held in the 1800s Victorian structure, located just outside of Dallas, and is considered the most haunted restaurant in the state. Their motto even reads "serving the soul and the spirits!" And they refer to the latter in more ways than one. I was really scared watching some of the paranormal encounters videos on the restaurant's website.

It seems like the spirits here just want to have a good time. People have reported seeing the appearance of a man and a woman in old-fashioned clothing dancing in the dining room. Some say that a young woman was strangled by her boyfriend on the spot, so maybe she found real love in the afterlife and is now having a great time. There are also pranksters who do things like pull guest ties, throw silverware off the table, and more. This could be the little boy that some customers also reported seeing, a photo of who was discovered during renovations.

It may interest you:  How do you eat in the world?

Despite these additional guests, the Irish Pub still allows for a good time. You may come across some unexpected teasing.

This building has been everything from a brothel to a concert hall to a cafe. So there could be all kinds of spirits stalking him. The story goes that over the decades, 13 unfortunate people died within those walls and, well, they have all remained there ever since.

From hearing phantom piano sounds to footsteps all the time, a jukebox seemingly turning on by itself (playing a tune that matches what's really going on at the time!) And even being touched, never you know what you are going to do. obtain. But this restaurant reportedly has the best burger in America and is known for being the best dive bar in Tennessee. So a few additional names on the guest list are worth the price of admission. Also, you can take a ghost tour if you want.

There was even a documentary about this southern goth restaurant. Built as a Victorian home in 1910, it has been the site of much paranormal activity. Some guests and employees have reported seeing faces in windows, orbs in photographs, or hearing strange and inexplicable sounds, such as sighs and murmurs.

Head to the upstairs bathroom and you may have an eerie feeling, as many have reported. It's so clearly haunted that you can choose to get a package that includes a ghost tour and three-course dinner.

This mansion, located in the heart of downtown Toronto, was built in 1867 by a prominent businessman who lived there with his family. But tragedy struck there. A maid reportedly committed suicide by hanging over the lobby, and there are several other stories floating around.

So much so, in fact, that when you dine there, you can ask to see a book full of paranormal encounters reported by staff and customers and get a guided tour. Some things people have reported include feeling cold wisps on their arms, light touches, the image of a woman in the bathroom mirror, a small child sitting on the stairs, and the sound of children's feet running.

2- The Horse You Came On In The Show (Baltimore, Maryland)

Some believe that the ghost haunting this restaurant is Edgar Allan Poe, given that he was a regular there, and it was rumored that he had been drinking there the very night he was found raving on the streets. He, as any historian knows, died a few days later.

Whether he is really the spirit of the famous poet or not, the staff have dubbed his unwanted friend Edgar anyway. Whoever he is, he likes to cause trouble by doing things like breaking glasses, swinging the chandelier, and opening drawers.

Head to Quebec, Canada, on the Montreal tourist city  and visit this 300-year-old restaurant to enjoy the delicious kitchen French Canadian, night life and some ghosts. In the 19 º  century, a girl would have died in a fire that destroyed part of the building, and some believe they have seen her walk around. Meanwhile, others say a second-floor piano has been known to play on its own and have reported chilling inside, even when it's hot and humid outside.

Reportedly the oldest inn in all of North America, having been built in 1688 by a French soldier, there is tons of history in the building. And probably more spirits lurking as well.

19 movies that talk about gastronomy and that you must see

The ten most important lunches and dinners of Humanity