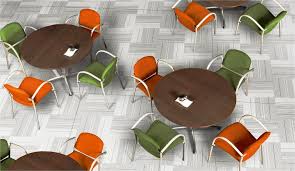 Alignment of chairs and tables. Essential requirement in the restaurant

Many times we focus on the food service, in how to decorate the dishes, finally in a series of important aspects in the restaurant and we ignore, so to speak, the furniture.
Let me tell you that the pleasure at the table not only begins when the client reads the lettersee the Prices, enjoy a drink or taste food. The pleasure starts from the moment the customer is shown to his table and sits down.
If the table on which the also information plan what to eat and drink is not comfortable; does not have the necessary spaces to carry out certain movements or for the dependent to transit and serve or withdraw food, a long period of dissatisfaction begins, to which other factors will add (which must be corrected or improved to avoid reaching a unhappy ending).
It is for this reason that I want to share with you some questions related to the title of this post.
Alignment is nothing more than rationally and harmoniously placing all the furniture in a dining room.

Table shapes, capacity and places where they are used.

Square. For 4 people. They are mainly used in simple services, as they are easier to align and join to form large tables.
Circular. Up to 12 people. They are used in restaurants formal service and ceremonial tables.
Oval. Up to 16 people. They are used at ceremonial tables.
Rectangular. (8 people or more.) Very practical and allow a wide range of possibilities in its use. Example: Ceremonial tables, buffet, double, combined with the circular tables, bars set up in salons where buffet is served, for cabarets, large and small banquets, etc.
Bar Tables. They are generally circular and very small due to the limited inputs that are placed on them. Its size allows to increase the capacity of the room.
Disks and boards. They make it easy to enlarge a small table by quickly turning it into a larger one or changing the shape of the table surface with several units, to create squares, ovals, rectangles and circles.

Proportion of tables in the classrooms, aspects to take into account when locating them.

In all classrooms there will be a proportion of tables of various sizes, tables for 2, 4, 6 and more people.
En restaurants For formal service most of the tables will be 4 seats, 2, some 6 and if the place is large 1 for 8 people.
Example in 20 Tables
In the restaurant of the Hotel, the number of tables for 2 people should be somewhat higher than in other places, given the composition of the groups of guests.
Example in 20 Tables

Aspects when locating them.

Alignment procedures and their benefits.

Alignment by a floor line.

Alignment by an imaginary line taking as a reference the legs of the tables.

Alignment taking as reference point an object located in the center of the table.

To align by an object located on the tables, proceed similarly but taking as reference the object in question that is on each of them.

The advantages of alignment are:

How to calculate the capacity of users in a room.

The average user occupies approximately 1m² of space including tables and chairs, if we add 20 cm for the space occupied by the corridors, sideboards, etc., we see that in general 1.20m² per person is necessary.

The installed capacity is achieved as follows:

Care of tables and chairs.

You must take into account that:
Placing chairs on tables is done so that only a third of your seat is under the edge of the chair. The seats do not, because their arms prevent it.

ABOUT US
We are Restaurant Management, a non-profit page where we share articles, tools, news and more about this sector. Our mission is to provide gastronomic entrepreneurs, students and workers with the tools necessary to achieve success.
Contact: fbconsultingtampa@gmail.com
FOLLOW US
© Newspaper WordPress Theme by TagDiv
error: Content is protected !!
We use cookies to ensure that we give you the best experience on our website. If you continue to use this site, we will assume that you agree with it.OKNoPrivacy Policy