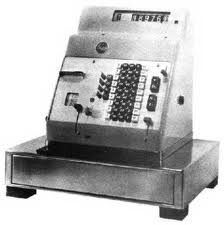 The cash register an invention that does not stop evolving

The first cash register was invented by the James brothers (Dayton, Ohio, 1837 - 1918) and John Ritty, in 1879. In 1878, James traveled to Europe on a steamer. On the ship he became interested in the propeller propeller revolution counting mechanism. This made him think of a mechanism to record sales in a salon he owned in Dayton called "the Pony House".

The first attempt was a complete failure. It looked like a clock with a keyboard. The hands indicated dollars and pennies instead of hours and minutes. The second was not much better. But the third was commercialized. John had improved it by adding a roll of paper so that he could record the sale of the employees. The register had a perforator that opened holes in separate invisible columns corresponding to dollars or cents. For example, if the paper had three perforations in the dollar column and felt in the pennies column, the sale had been $ 3,07. The register was called Ritty's Incorruptible Cashier and it sold for $ 50. The machine at that time lacked a hood and drawer, nor did it give a receipt.
The Ritty company was originally called the National Cash Register, but in 1882, after a restructuring, its name changed to the National Manufacturing Company.
In 1884, John Henry Patterson (1844 - 1922), a Darmouth College graduate, owner of a coal business and a retail store, bought the Ritty company when it was in blatant decline (in fact, Patterson's decision It was initially considered a joke) for $ 6.500. Patterson returned the old name of the National Cash Register.
Apart from fundamental modifications to the cash register (drawer, receipt, display, bell, department totals, etc.), Patterson introduced novel management methods to his company and was especially careful in training his sales force.
As it did? Well, creating a few new sales methods. He assigned commercial agents exclusive territories, to meet his goal of one registrar for every 400 citizens. He established a point system on sales (in the same plan as many shops today), with monthly and annual fees. The Hundred Points Club was founded and the best sellers were awarded. Patterson also promoted advertising, trained its salespeople, and created a sales manual.
Your success management, which lasted until his death, is verified by the fact that he became his company, first the National Cash Register Company, then the NCR Corporation, one of the leading computer companies. This shows that in relation to informatics not only technological developments count but also commercial relationships. An example can be read in Patterson's manuals that may still be useful today. The manual shows the five fingers of one hand to illustrate the following five points:
Ordinary one-day transactions with your clients can be grouped into five classes, as follows:
In 1911 the company sold one million units (359 in 1884); in 1922, two million. In 1921 the Class 2000 was released, called the Mother of the Machines. It provided 30 totals.
Following the purchase of the Ellis Adding and Typewriter Company in 1929, NCR produced Class 3000, which added a description of the entry to the number record. An electric motor had been added to the original Ellis machine in 1911. Until around 1980, it is said that there were Class 3000 machines in operation; few, yes.
The Saturday Evening Post said it very clearly: "Patterson turned cigar and whiskey-smelling vendors into a new breed of men." A magazine came to rate him as one of the greatest American entrepreneurs.