Gastronomic culture in the Roman Empire

The first image that comes to mind whenever we associate the world of Rome with the kitchen it is the sumptuousness.

It is true that Maecenas was the first to eat meat of mule, or that the actor Farón, to entertain the Emperor Aureliano, ate a suckling pig and a wild boar among other things. However, the origins of the kitchen Latina were humble and austere.

Until the XNUMXnd century BC the kitchen Roman was based on staple foods: the pulmentum or porridge of millet, barley or peas, the cheese sheep's milk, boiled mutton, cabbage, broad beans, etc. Fruits also occupied an important place: apples, apricots imported from Armenia, melons brought from Persia, figs and dates.

It was in the early XNUMXnd century BC that the Romans entered Asia Minor and discovered the refinement of the Eastern Greek courts. From this moment on, the preparation of meals, according to Livy, became long and expensive. The services of the cooks, work until then carried out by slaves, began to pay very expensive. 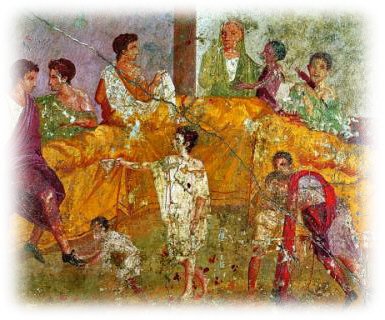 There are two writers that more and better constancy have left of food and culinary traditions in Roman times. In chronological order, Marco Gavius ​​Apicius (Caius Apicius), born around 25 BC, author of the recipe book Of re coquería libri decem (The ten books of kitchen), was an obligatory reference for several centuries. The titles, written in Greek, of the ten books of Apicius, are as follows:

It may interest you:  Fast food, slow food: culture or barbarism?

Apicio was considered as a refined connoisseur and also, as a great profligate. He was noted for his extravagances and expensive tastes. Apparently, he invented a procedure to fatten trout with dried figs, in order to fatten their liver; as well as some recipes for flamenco or nightingale tongues, bristle nipples and numerous cakes and sauces.

Athenaeus relates that he chartered a boat to see if the Libyan shrimp were as big as claimed. Disappointed, not even down to earth. He spent his entire fortune on sumptuous banquets until one day when, counting what he had left, he preferred to poison himself rather than reduce his lifestyle.

Although it has been considered the first computer in the kitchen Roman, had precedents in Rome itself, such as Ambivio and Macio. The ten books Of re co-machinery that have come to us with his name are, without a doubt, a reworking of his work carried out in the XNUMXth century AD, written in a very incorrect way and close to the spoken language.

The next point of reference for Roman cuisine is Petronius, the so-called arbiter of elegance in Nero's time. his Satyricon it is the most objective depiction of Roman life at that time.

It is the narration, made by a dissolute man named Encolpo, of his adventures in the company of two men as unscrupulous as he. The scene that has survived takes place in various cities of southern Italy. The most important episode extensively describes a ridiculous feast at the home of a very rich freedman, Trimalción.

This novel has served so that we know exactly how a table was arranged and what was the ritual and the parts of a typical Roman banquet. The triclinium or dining room is of paramount importance in the Satyricon.

It was a room with three beds, around a table of which everyone used. Diners leaned on their left arms and ate with bare feet. In each of the beds, three people were installed in their respective places from right to left: upper, middle and lower bed.

It may interest you:  Brief history of kitchen development (2020)

Roman houses had at least two triclinium, summer and winter, depending on the direction of the sun. In the house of Trimalción there are several triclinium. 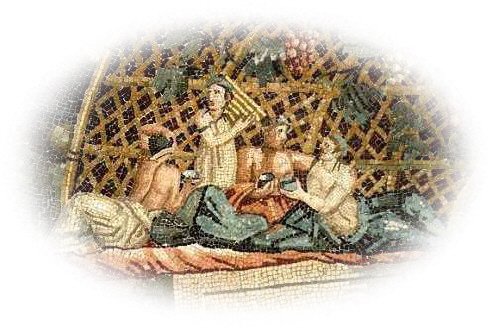 The dinner of Trimalción happens to be an example of the classic Roman dinners. Occupies in the Satyricon a great extension. Dinner opens with the ablution of the hands after leaving the bath in the hot springs. Next comes the gustatio or appetizer entrance. The dinner itself, summa dinnerIt consisted of four courses or services, and was washed down with abundant wine.

It ended with the second message or dessert, consisting of dry seasoned delicacies to favor the drink, which in the end was very copious. It should be noted that the Romans drank pure wine merum, mixed with hot water and spices. Pure wine without mixing, they reserved it for religious libations.

The Roman dinner unfolds within a label made up of timeless customs, such as meditating on death, offering gifts and small sums of money, libations to the Lares gods, etc. Desserts discussed philosophical or literary themes and recited verses. The guests perfumed and crowned themselves with flowers, and they sang.

To get an idea of ​​the cult of exotic food, we should highlight a quote from the Satyricon which alludes to the appearance, at a given moment of the banquet, of a fountain with the twelve signs of the Zodiac arranged around it.

The cook had placed a small delicacy on each of them: “… On Aries, chickpeas that resemble the ram; on Taurus, a piece of ox; on Gemini, criadillas and kidneys; on Cancer, a crown; on Leo, a prickly pear; on Virgo, a gilt vulva; on Libra, a scale in one of whose plates there was a cake and a cake in the other; about Scorpio, a small marine fish; about Sagittarius, a snail; on Capricorn, a sea lobster; on Aquarius, a duck; on Pisces, two mullets. The center was covered with grass, on whose grass was a honeycomb ..."

It may interest you:  Snails, something about its consumption

As we can see, much of the current Mediterranean culinary culture has its origins in the ancient Roman Empire.