Coronavirus: The future of many restaurants is uncertain

Large chains appear to be equipped to resist coronavirus closures, but small businesses are struggling to get help from governments and customers.

Recovering is difficult and difficult

It took JoAnn Clevenger two months to reopen Upperline, a traditional Creole restaurant in New Orleans, after Hurricane Katrina devastated that city in 2005. This time, a virus closed the place, probably for much longer.

It didn't take long for him to realize that a takeaway operation wouldn't keep the business, and the odds that it will reopen soon will be against him. On Thursday, Clevenger wrote the latest paychecks to her 24 employees, some of whom had been with her for more than 25 years.

"Stay safe, stay in touch," he wrote on each one. "You are what makes Upperline great."

The outlook for independent operations like hers looks dire. From big cities like New York to smaller ones like Birmingham, Alabama, the restaurants have forced to close their dining rooms; many have simply closed, while others are relying on takeout and delivery. Cities like Omaha and Tempe, Arizona, have limited the number of guests, but closures are on the horizon.

Large chains and groups of restaurants well funded they have the resources to get out of a prolonged shutdown but the restaurants Freelancers representing about two-thirds of the American food scene: noodle shops, diners, and that charming restaurant urban that always had a tail. the door may not survive.

Analysts and restaurant operators have been citing an estimate that 75 percent of restaurants Independents that have been shut down to protect Americans from the coronavirus will not make it. The National Association of Restaurants He estimated this week that the entire industry would lose $ 225 billion in the next three months and lay off five to seven million employees. 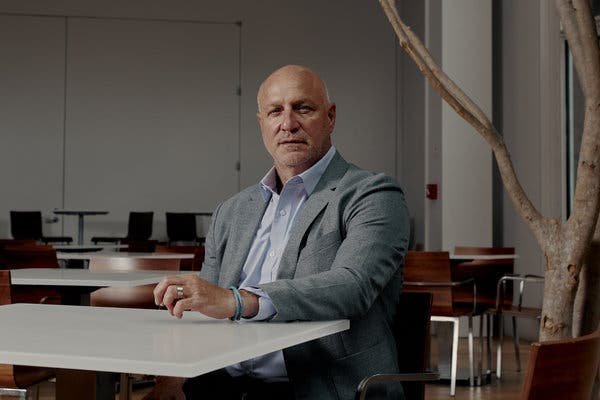 “It's much harder than saying, 'Let's get down for a month and a half, and then we open up and everything is fine,'” he said. Tom Colicchio , the New York chef and television personality who himself laid off 300 people at seven restaurants.

"This will take a year," said Colicchio, who believes the 75 percent failure rate is not an exaggeration. “The world has just changed. The magnitude of the problem here is that older people cannot understand it. "
.

But many restaurants, both large and small, are not going to go down without a fight. Customers and owners, including Mr. Colicchio, are organizing a fast-growing offensive, from selling groceries to selling government lobbying for policy changes and financial aid.

The National Restaurant Association requested the Wednesday to federal government a recovery fund of $ 145 billion. The application, sent to President Trump and Congress, includes loan programs, $ 35 billion in disaster relief grants for restaurants in hit areas and communities, and help pay for unemployed workers.

It may interest you:  The cash register the invention that always evolves (2020)

Restaurants with those policies are already hiring their insurers. Oceana Grill, in New Orleans, filed a lawsuit on Monday asking a state judge to state that the business interruption policy of the restaurant covers your current closure. 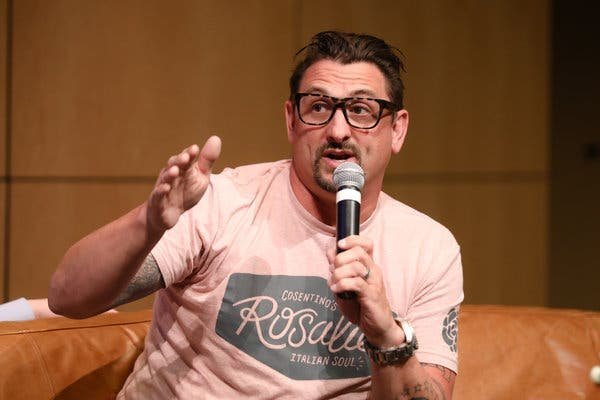 Chefs and restaurant owners are also coming together to maximize their lobbying power. Chris Cosentino is one of several chefs trying to organize political efforts under the hashtag #saveamericanhospitality .

“The takeout and delivery would have just been a band-aid,” said Mr. Cosentino, who this week closed his restaurant in San Francisco. "It would not have been worth risking the health and safety of my employees, their families."

A group of New York's top chefs and restaurant groups have formed Aid for All Restaurants, a coalition to lobby state and local governments to help save the industry. "We are on the brink of extinction," reads the group request at change.org.

His first initiative is to pressure Governor Andrew M. Cuomo to postpone sales tax payments. The coalition also wants the state to help reduce rents, provide emergency employment benefits, and make rapid zoning changes and allow laws so that restaurants can sell alcohol to go or use their spaces as grocery stores.

In Tampa, Florida, Jordan Johnson bets on the idea of ​​the supermarket. He spent almost a year preparing to open Naked Farmer, un restaurant Quick and casual serving food from local farms. He was planning to start training 20 employees next week for a grand opening on April 1, when it became clear that it would not happen.

Then he turned. It reduced its staff to four and decided to become a digital farmers market that delivers fresh produce like arugula and sweet potato. The goal is to expand into prepared foods, all in an attempt to keep some people employed and pay the crushing rent of $ 6,000 on a dining room that he can't use.

#Do not leave home
“We are not as devastated as maybe a restaurant high kitchen that it didn't have a delivery mechanism, ”he said. "If we didn't come up with this idea, we would be sitting on the couch doing nothing and looking at all the conspiracy theories."

Customers are also trying to do their part. Online fundraising campaigns for individual restaurants are appearing almost per hour. The visitors office in Charlotte, North Carolina, maintains an updated list of restaurants that offer takeout or delivery. On Friday, a national social media campaign began with the hashtag #toosmalltofail , urging customers to call lawmakers and lobby for help on behalf of independent restaurants.

On Thursday, before the debut of the last season of “Top Chef”, Padma Lakshmi, one of the stars of the show, posted a video on social media urging people to buy gift certificates or products from their favorite restaurants. "See if they have anything like hats and T-shirts that you can buy," he said.

In Brooklyn, the Gowanus Dredgers Canoe Club , a team that regularly navigates the Gowanus Canal, published a list of restaurants and other businesses in the neighborhood that are still open. The members have started paddling along the canal with a hand-painted sign urging people to buy gift certificates.

"Every individual has an agency," said Brad Vogel, who painted the sign. "Even if you are home alone you can do something"

Still, the understanding is sinking that many restaurants will only be able to survive for a take out time. Gift cards help, but many customers buy them knowing they are likely microloans, with no guarantee that the restaurant will be around for long.

Gadi Peleg owns Nur, a modern 59-seat Middle Eastern restaurant in Manhattan's Flatiron district, whose menu It is supervised by Israeli chef Meir Adoni. Don't know how long and Lick it , your other restaurant, may continue to offer takeout, or the direction your other business will take, Breads Bakery .

Mr. Peleg did not say how many people he has laid off, but said he has consolidated the two restaurants into one kitchenHe has cross-trained chefs to produce both menus and is doing his best to keep people working. 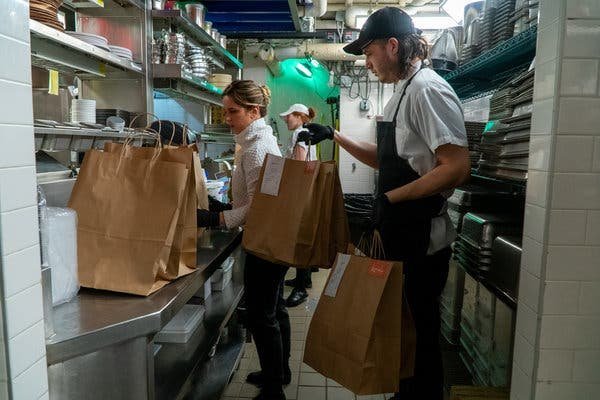 Ofir Horesh, right, the executive chef of LamaLo in Manhattan, helping with bags for delivery. Credit… Emon Hassan for The New York Times

"We have reduced it to a point where we are trying to remain sustainable," he said. “What I say to my staff is that the present is impossible to decipher right now. We are trying to focus on the future. "

When that future arrives, the reopening of restaurants will be a slow wave. The chains, which have the legal resources and corporate structures to navigate the complex process of securing government loans and grants, will likely reopen quickly, analysts say. Small, nimble places with simple menus, like burgers and taco stands, can also react quickly. But the longer the closure goes on, the longer wait time high-end restaurants will have. kitchen and places with complex menus to run.

"Even if we're only off for three months, you can't turn the light back on," said Danny Meyer, who this week laid off 2,000 employees , about 80 percent of its Union Square Hospitality Group workforce. "It will take at least four to six weeks to get back on your feet."

And the restaurant landscape will likely look very different. Nur partner Daniel Shein is trying to raise capital for Agnoris , a startup software company designed to help restaurants use data to run more efficiently. He presented the idea to investors on Monday as part of "demo day" at And Combinator, a Silicon Valley initiative that helps startups refine their products and present them to a select audience of investors.

The paradox of launching a product for future restaurants while trying to save one from dying is not lost on him. Like others, including Mr. Colicchio, Mr. Shein said the only bright spot in the crisis is an opportunity for the restaurant industry to renew itself.

It may interest you:  How the Restaurant Opinion Websites Work

Before the virus attack, the nation's restaurant business was nearly overheated, with many cities opening up new places faster than diners could keep up. The restaurants were essential services for developers and gentrification markers in the neighborhoods. Rising rents, labor shortages, and struggles to find a better way to care y compensate employees they were constant topics of conversation.

When the industry starts again, many say it will be a time to let go of outdated business practices and develop new and more creative ways to feed people.

"The industry has been in need of a correction, and none of us wanted what is happening now, but this will force people to revisit the business side and not just the culinary side," Shein said. "It will be a very painful few months, but I hope that people do not give up and come back with this desire to change the game."

Until then, some analysts say, smaller independent restaurants have a better chance of survival.

An example is Porridge & Puffs , in Los Angeles. A week ago, its chef and owner, Minh Phan, was canceling events faster than he could rewrite contracts. Within two hours, all of his reserves evaporated.

She has only six employees and made a promise to keep everyone for as long as possible. So far, none of them have had their hours reduced, but she is using her savings to pay for them.

On Thursday, the team cleaned up the dining room to turn the restaurant into a grocery store, selling comforting rice porridge, prepared foods like pickles and jams, bunches of flowers, and bulk staples for home cooks, from rice to two-pound bags. . dried chickpeas. The site The restaurant now allows customers to pre-order, and staff pack take-out boxes in historic Filipinotown.

"But it's not a great long-term plan," Phan said. Supplies will be increasingly difficult to buy, and labor is expensive. If the situation continues for six months or a year, Ms. Phan will work out another plan, adapting to keep the lights on.

"I am optimistic," he said. "I thrive during the war."