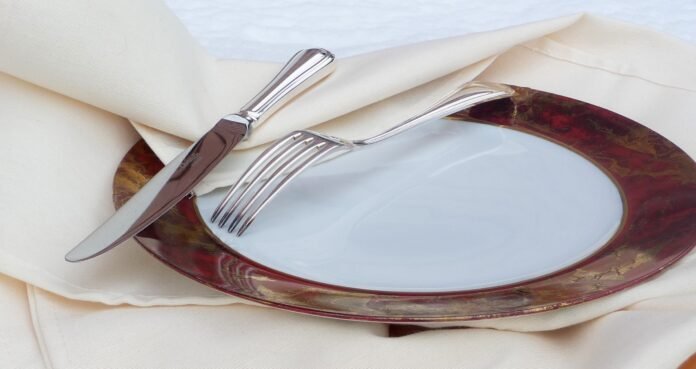 How to use cutlery on the table

Each dish is eaten differently. The rules of protocol and etiquette at the table are not only reduced to how to place the diners or knowing how to use the napkin correctly, there are many other things that are included in the so-called 'table etiquette', such as the most appropriate ways to eat different foods.

The cutlery is used from the outside in and will be placed in the order of the food to be served. The essence of good manners at the table is to be as discreet as possible and to hold the cutlery in a natural way.

There are two ways to handle the knife and fork:

European style: The diner does not drop the cutlery at any time. Proceed to cut the meat or food served with the knife, usually one piece at a time and use the fork with the Left hand, with the tines pointing down, to pierce the piece and bring it to the mouth.

American style: It is distinguished because the diner first cuts a few bites of food and then leaves the crossed knife right in front of the plate. He fork it is then switched to the right hand. The left hand rests on the knee while the fork is being used. Therefore, the diner changes these cutlery from one hand to another as many times as required throughout the meal.

We all know that the softest dishes are eaten with a fork, meat with a knife and fork and fish with a shovel and a fish fork, but there are certain dishes that can raise doubts when it comes to “sinking your teeth”: ¿ with a knife, with your hand, with a fork…? So that you never find yourself in an uncomfortable situation for not knowing how to eat some food, know how to eat the following dishes:

It may interest you:  Types of Kitchen Knives

Artichokes: To eat this vegetable the most recommended is to use your fingers. The leaves are taken one by one with the hand, the lower part (the meatiest) is eaten and the upper part (fibrous) is placed on one side of the plate. When the heart of the vegetable is reached, it is eaten with a fork.

Asparagus: The most correct way is with your hands. They are taken by the part of the stem with the fingers, they are dipped in the sauce (if any), and the moistened part is introduced into the mouth, taking a bite and without sucking. If they have hot sauce on top or are au gratin, they can be eaten with a fork.

Mussels and clams: Shell mollusks are eaten with a fork, but they can also be ingested by introducing a piece of the shell into the mouth, like a spoon.

Spaghetti and noodles: With the fork in the right hand, take a few and turn them until they roll up enough to be able to put them in the mouth. There are places where they put a spoon together with the pasta dish to make it easier to turn the spaghetti on the fork, but this is not frowned upon. Of course, in Italy, the country of pasta, it is a "crime" to use a spoon to eat them.

Caracoles: In many places they accompany this dish with chopsticks or pins to extract the meat of the snail, but the correct thing is to use the special cutlery: one to hold it and another to take the edible part.

Fish: First the head and tail are separated with the fish shovel and then cut lengthwise to open the piece. Finally, the portions are separated to be able to break them more easily.

It may interest you:  Camella milk, the new gastronomic trend.

Fruits: Small fruits such as grapes, cherries, plums or tangerines are eaten with the fingers and the bones are dropped in the hand, and are discreetly deposited on one side of the plate, never spit out. The dessert knife and fork are used to eat pears, oranges and apples. They are cut into four portions and each one, in turn, is peeled with the knife while holding it with the fork. Then they are broken into smaller pieces as it is consumed.

Daily organization of the restaurant. (2021)