The history of pizza begins surely with the history of the use and preparation of bread by humanity, it is recorded that in ancient Greece (the cradle of flatbreads) the "plakuntos" was already taken, decorated with herbs, spices, garlic and onion, in the time of Darius I the Great the Persian soldiers took flat bread with melted cheese from the top and Virgil in his Aeneid mentions a similar dish. 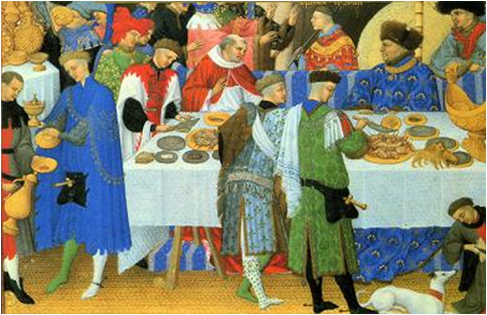 Flatbreads, such as pizza, are typical of Mediterranean kitchens, so there is the ancient focaccia (food of Roman soldiers) that dates back to the ancient Etruscans, coca (which has sweet and salty variants) of the kitchen Catalan and from the Balearic Islands, the Greek “Pita” and related to the Turkish “Pide”. Similar breads exist outside the Mediterranean area including the idio Indian "Paratha" and the German "Flammkuchen".

THE PIZZA AND NAPLES

It is possible that the innovation gave the idea of ​​putting tomato sauce on top on a flatbread becoming the "pizza" that we know today. A few centuries before, the tomato was brought to Europe after the discovery of America, and already in the XNUMXth century, although the fruit was present in European plantations, it was not eaten under the belief that it was poisonous (as well as other fruits in the Solanaceae family). ). However, at the end of the XNUMXth century, in the poor areas around Naples, tomato was added to a flatbread made with yeast and in this way pizza was born. Pizza gained popularity and soon became an attraction for people who came from outside to visit the city and ventured into the poor areas to try this local specialty. 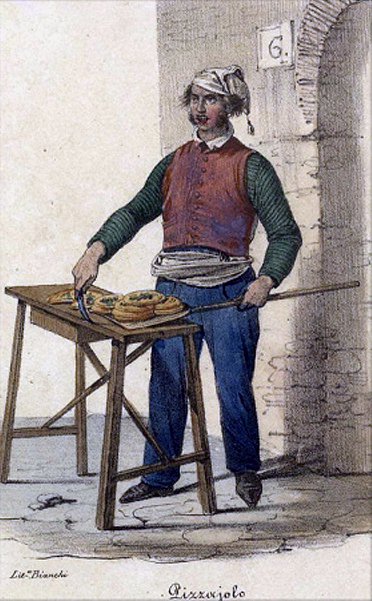 It may interest you:  Brief culinary dictionary

It was not until 1830 that pizza was sold in open-air establishments as well as by street vendors. The old pizzeria Port'Alba in Naples is considered to be possibly the first pizzeria in the world. They started producing pizzas for pedestrians in 1738 and expanded to a kind of pizza-restaurant with tables and waiters in 1830 and they serve pizza under the same premises today. There is a description of pizza at the court of Naples from 1830 and it is made by the French writer Alexandre Dumas (father) in his work Le Corricolo, chapter VIII. He writes that pizza is the only food of the humble people in Naples during the winter, and that pizza "in Naples was made with oil, bacon, cheese, tomato and anchovies."

La kitchen Neapolitan is very strict with the making of her pizza. Purists such as the famous "Da Michele" pizzeria in Via C. Serlesale (founded in 1870) consider that there are only two real pizzas: the "Marinara" and the "Margherita" and that it is all that should be served. The Marinara is the oldest with a coating of tomato sauce, oregano, garlic, olive oil and some basil. The name Marinara is not because in the past this pizza carried fish (as many people believe) but because it was the food of fishermen when they returned from their activities in the Bay of Naples. The Margherita pizza is attributed to Raffaele Esposito. Esposito worked at the pizzeria "Pietro ... e basta così" (literally "Pedro ... and this is it" which was founded in 1780 and which today continues to operate under the name "Brandi" Pizzeria). In 1889 he put three different pizzas in the oven to celebrate the visit of King Umberto I and Queen Margarita de Savoya. The pizza chosen by the queen among the three was the one that, due to its contents, reminded her of the flag of Italy - green (basil leaves), white (mozzarella) and red (tomatoes). This combination was named Pizza Margherita in his honor.

It may interest you:  The calculation of the cost of food. An approach to culinary relationships 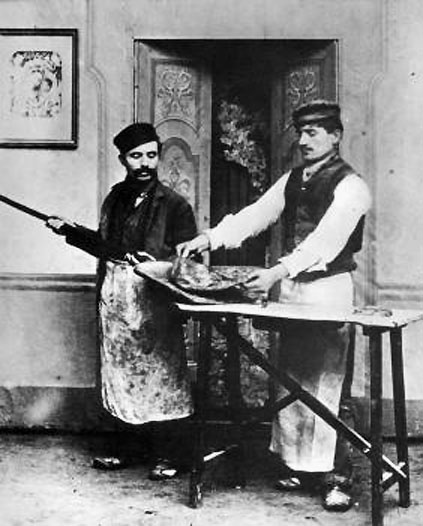 The Associazione Verace Pizza Napoletana (“Association for authentic Neapolitan pizza”) was founded in 1984 and only recognizes the Marinara and the Margherita, and establishes a fixed number of rules for their preparation. These include making the pizza in wooden ovens, at 485ºC for no more than 60 to 90 seconds; that the base should be made by hand, that the size of the pizza should not be more than 35 cm in diameter or that it should not be thicker than one centimeter in the center, etc. The most famous and traditional pizzerias in Naples are: Da Michele, Port'Alba, Brandi, Di Matteo, Sorbillo, Trianon and Luigi Lombardi Di Santa Chiara. Most of them are located in the historical center of the city. Some of them have their own rules, for example, the “San Marzano” pizzas use tomatoes grown on the slopes of Mount Vesuvius and only olive oil poured clockwise. The pizza bases differ in various places in Italy in Naples it is soft but in Rome they are crispy. In Italy the “pizza al taglio” is popular, it is a rectangular pizza that has a variety of ingredients.

These are the best gastronomy schools in the world - 2021

Do you know the guide to measurements and conversions in the kitchen? - 2021