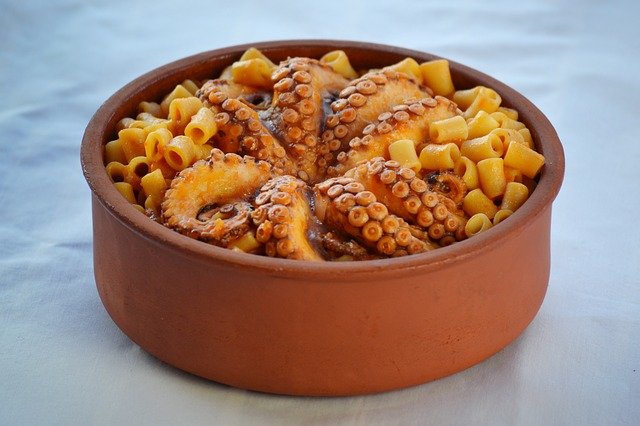 On January 21, 2008, Gabriela Aguirre published the article that I share below. You can find it at http://historiagastronomica.blogspot.com/2008/01/la-cocina-griega.html. I hope you find it as interesting as me.
La kitchen Greek is fundamentally Mediterranean, its basic products are olive oil, wine, legumes and fish. Based on these ingredients, which were already mentioned in ancient Greek texts, the Byzantine influence was and is still remarkable, leaving signs in its way of eating and feeling.
Ancient Greece did not stand out for its elaborate dishes, they were very simple and austere in their making. Bodrio, famous Spartan soup was not recognized for its good taste, but was an extremely austere food with strong flavors, hence the name "bodrio", as something unacceptable, poorly done or unpleasant.
Greek cuisine is currently reflected in its kitchen, nothing pretentious and full of flavor. The fresh products that reach their stoves demonstrate the care and care they put into the selection of raw materials. The fields of olive trees, lemon trees, vegetables and greens that dot the landscape of Greece tell us of a kitchen connected to the environment: rich, varied, full of lemons, garlic, olive, lamb, fish, eggplant, goat cheese and yogurt. If you add the oriental influence, it becomes a kitchen recognized worldwide with its own personality without abandoning its roots in a land bathed by the “Mare Nostrum”. If there is to mention any Greek dish recognized around the world, moussaka can be one, based on aubergines and minced meat, others can be kebabs, spread throughout the Middle East, Pilaff rice, dolmades or vine leaf rolls stuffed with rice, and other delicacies such as tzatziki or cucumber and yogurt soup, an essential element throughout the Balkans. As we can see, Greek gastronomy is so rich and varied that it is difficult to summarize. Greece is a land of tradition and also the recipient of many influences but without losing its own personality, which has left its mark on the entire world. It is the natural bridge between Europe and Asia where flavors, smells, textures are added in a simplicity provided by the rich products of the Mediterranean. It does not need any further transformation because its rich products offer the palate everything it can ask for.

7 steps to bone a chicken