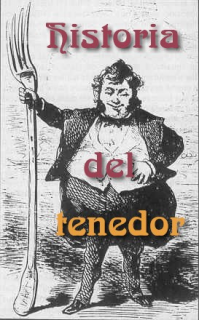 The humorous history of the fork. A story to tell

The humorous history of the fork has its antecedents in the timid attempts to introduce the custom of the use of the fork since the beginning of the XNUMXth century in Europe and which did not become general until well into the XNUMXth or early XNUMXth centuries, the reasons for this delay are attributable to multiple causes, from purely religious to sociales and even political.

Europe, and in addition the entire western civilization, ate solid food using a tool simple but effective, your fingers. Let's not interpret this act as barbaric as they try to show us in Saxon films. The European had his rules or labels when it came to sitting at the table, it was polite to take food with the tips of the fingers, without filling the hands or face according to Ovid. On the other hand, food, especially meat, already came to the table cut into small portions and even the knife was unnecessary.

At least the upper classes demanded neatness and elegance at mealtime, it was inexcusable, for example, finger-sucking, and it was the norm to clean your hands in the jugs after each plate or at least at the end of the meal. A first code of good manners for diners is due to King Henry III of France and is worth quoting a fragment of a treatise edited in 1.545 by Jean Sulpice and entitled Libellus moribus in mesa servandis: Take it meat  with your three fingers and don't bring it to your mouth in big pieces. Don't keep your hands on your plate too long.

In the XNUMXth century, the custom of certain ladies to eat with gloves on was considered an exquisite refinement. Queen Anne of Austria, famous for her white hands, ate gracefully with her fingers sheathed in very elegant gloves.

Finally, and before entering into the invention of the fork, we will quote an excerpt from Erasmus of Rotterdam from his treatise on Civility: Instead of licking your fingers or wiping them on your clothes after eating, it will be more honest to dry them on the tablecloth or napkin.

The fork: A place setting with history

The fork came to Europe from Constantinople in the early eleventh century from the hand of Theodora, daughter of the Emperor of Byzantium, Constantine Ducas. He took him to Venice when he married Doménico Selvo, Doge of that republic. But Teodora was crossed out for her contemporaries, by this and other refined oriental ways, as scandalous and reprehensible and even San Pedro Damián admonished these extravagances from the pulpit, coming to call him instrumentum diaboli since it was very difficult to eat spaghetti, macaroni or noodles with such an instrument.

It may interest you:  The bartender ... A cocktail of virtues and knowledge

The 'tenedorists' attempted several assaults to penetrate this instrument in France without success, in the Middle Ages Catherine of Bulgaria wanted to make it popular in court but the French took it as corny and licentious. Later it was Charles V of France, who met him in Venice after returning from a trip from Poland, but this time the failure had purely sexual reasons, the king's hobbies were well known, the mignons so inseparable from the king had a reputation for homosexuals like the king, and the fork lost the battle again when being considered as a capricious object typical of somewhat equivocal people.

The reality is that the rejection that the fork had for centuries more was due to an inability of the diners that to a possible lack of utility, an author says of him: wounded them, pricking their lips, gums, and tongue with their sharp spikes, and there was no lack, especially the ladies, who elegantly and gracefully used it to clean their teeth in the manner of the popular toothpicks.

Already in the XNUMXth century, Tomas Coyat, an intrepid English traveler, tells how widespread the fork was in Italy when he tells us: Italians always use a small instrument to eat and touch meat. The person who in Italy touches the meat with his fingers offends the rules of good education and is criticized and viewed with suspicion.

It is a strange thing that you cannot convince an Italian to eat with your fingers, he will always reply that not everyone has clean hands. And I have adopted this custom and I keep it even in England, but my friends make fun of me and call me furcifer.

In Spain we find references in the fourteenth century as an instrument used by the carving masters and the Marquis de Villena in a treatise entitled Cisoria Art 1.423 includes a utensil with the following description: The second one has a trident, because it has three points, where the first one has two; This serves to have the meat to be cut, or something to be taken, firmer than with the first.

The use of the fork became widespread in Spain in the XNUMXth century and in particular it was Barcelona that created the first industry in the manufacture of these indispensable, today, utensils.

It may interest you:  What cutlery do we put on the table?

This article was published in 2005 in Kitchen History