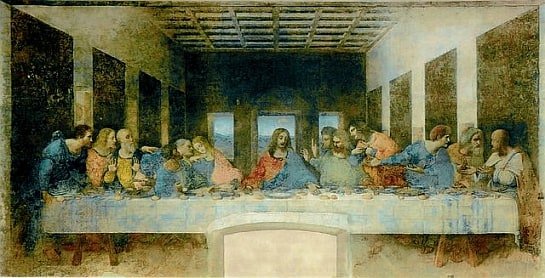 The ten most important lunches and dinners of Humanity

There are innumerable types of dinners and meals: more or less fun, intimate, work, engagement, romantic, pending, fast, slow, long afternoons ... There are also bacchanalia, tripoteras, snacks, caterings, dinners with live music and tapas on naked bodies. But then there are important dinners and lunches, those that have their own place in history (and prehistory and intrahistory) of Humanity for its meaning, its protagonists, its circumstances or what was treated or eaten in them.

It is true that generally in these agapes it would seem that the least important thing is what is on the tablecloth, but if one analyzes it in a more detailed way it turns out that in the case of food, as it happens in chess, the order (and nature ) of the factors does alter the final product. For example, If the wicked Eve had given Adam's innocent one a roast suckling pig instead of a healthy apple, could anyone venture if he himself had the destiny of Humanity? multiplying by I don't know how many original sin?

Well, leaving the interpretations to the reader's good judgment, in Actualidad Gastronómica we have set out to gather ten of the most important dinners and meals in the history (and prehistory and mythology, and religion) of Humanity.

1) Adam's apple. Our first parents clearly opted for un menu Frugal and vegetarian for your first sinful agape. Apart from the fact that it may be curious that a simple apple unleashed the wrath of the implacable God of the Old Testament (What would have happened if Adam and Eve had allied with Satan to squeeze some chickens, had arrived in Last Judgment ipso facto?), there is no doubt that this innocent snack was at the same time the first revolutionary act of mankind.

It is true that we were expelled from Paradise, but it is no less true that such a decision brought with it other blessed curses, such as the sin of gluttony, fashion (which started with those biblical loincloths) or sinful sex.

2) The Last Supper. It is the dinner of all dinners and, as in the previous case, did not stand out precisely for the variety of the menu. However, despite the simplicity of the letter, we can say without fear of being mistaken that whoever bet on bread and wine for that day was right, because of course he has been and continues to be imitated to satiety, millions of times every day in many other churches and parishes around the world.

In addition, although in the strictly culinary aspect it was not to remove the hat (unlike other agapes such as the Canaan weddings, why deny it) of course it was quite intense, since in addition to being a central piece of Catholic symbology, the sea of ​​interesting was surrounded by events (betrayals, arrests, transfiguration of bread into meat and wine into blood, foot washing, etc.).

3) Plato's Banquet. We do not know if the poet Agathon knew that his banquet was going to give so much of itself when he summoned his friends to eat in 416 BC. The case is that after getting to the top of food and came the aforementioned and other compadres such as Socrates, Aristophanes, Pausanias or Erixímaco They ended up talking about Eros, that is, about love, and of course, they messed it up brown, to the point that Plato could not pass up the opportunity to leave us as a legacy a text that, of course, gave rise to the concept of platonic love, which has done so much damage later.

It may interest you: Do you want to know what are the most expensive dishes, drinks and desserts in the world?

4) The menu of the Koran. But not only the Catholic tradition refers to food; The Koran also includes an episode that shows why Moses did not remain handless in culinary matters. One of the first references is in Sura II – 54, when Moses says the following: "We made a cloud loom over your heads and sent you the manna and the quail, saying to you: eat delicious delicacies that we have given you ». And he continues: «And then you said: O Moses! We can no longer bear the same and only food; Pray to your Lord to make sprout for us of those products of the earth, vegetables, cucumbers, lentils, garlic and onions », something that Moses did not seem entirely right, because he threatened to return the Jewish people to Egypt.

Also in this line, although in this case there may be sanitary reasons at the origin, the Koran includes the prohibition on eating certain foods, a prohibition that remains in our day: "You are prohibited from eating dead animals, blood, meat of pig, and every animal on which a name other than that of God has been invoked ». However, he seems to appeal to indulgence by adding: “He who did it, moved by necessity, and not as a rebel and transgressor, will not be guilty. God is forgiving and merciful. "

5) The biggest banquet. As long as the contrary is not proven, because new or future archaeological discoveries find new evidence, the greatest banquet of antiquity, the most lavish and pantagullic, was the one that took place on the occasion of the celebration of the end of the urban redevelopment of the city of Kalah by King Ashurbanipal II (883-859 BC), who made it the capital of the kingdom of Mesopotamia, taking away such honor from Nineveh. As Karlos Azcoytia relates in Historiacocina.comAt the banquet, which lasted ten days, no less than 69.574 diners were invited. They also invited the god Asur, the Great Lord of the gods from all over the country, although he does not know if he ended up coming or not.

Azkoytia adds that knowing the sophistication of the kitchen Mesopotamian, these foods were accompanied as garnishes and condiments the following foods: 10.000 pitchers of sesame grain and others; 1.000 baskets of vegetables; 300 jugs of oil; 300 servings of grain salt; 100 pitchers of pomegranate juice; one hundred serons of grape bunches; 100 servings of fruit; 100 of pistachios; 100 loads of garlic braids; 100 onion braids; 100 loads of turnip bunches; 100 jars of honey; 100 servings of clarified butter; 100 roasted lentils; 100 measures of milk; 100 of cheese and endless foods whose names have no translation.

It may interest you: The most exotic of cuisine in 'Strange Restaurants'

Not surprisingly, King Ashurbanipal II was quite satisfied after the treat (another thing would be how the state coffers were) and wanted to leave a few words for posterity: "When I inaugurated the palace of Kalah, I fed in this way, For ten days, 47.074 men and women I had invited from all over my kingdom, as well as 5.000 representatives from various countries, plus 16.000 inhabitants of Kalah and 1.500 members of the staff of my palace, that is, a total of 69.574 guests, to the ones that I fed and drank and those that I provided the necessary for their cleanliness. So I honored them before sending them home in good harmony and joy! " We often say that the monarchy is in crisis, but of course, there are no more kings like these.

6) The Columbus Egg. After the magnificence of Asurbanipal II we return to frugality, in this case with Iberian roots. More than a meal it was a culinary demonstration, comparable perhaps in our days to those that are sometimes seen in Madrid Fusión. What is clear is that the way Columbus had to put an egg on its feet demonstrated, among other things, that sometimes the most complex a priori purpose can be carried out in the simplest way, a concept that high kitchen He has known how to use as he deserves.

7) The most alcoholic funeral. In the ancient Greek civilization, it was traditional for funerals to be completed by a good banquet, especially if the deceased was a king. And what king has been, is, and will be more king than King Midas himself? The monarch who ruled Phrygia (present-day Turkey) in the XNUMXth century BC He wanted to close his existence with a monumental agape in which alcohol, in the form of wine and mead, was one of the great protagonists.

In fact, in the excavations carried out in 1957, three enormous 125-liter cauldrons were found that contained a mixture of wine and mead, as well as 100 bronze cups, indicating that each guest at the funeral racked at least 3,5 liters of alcohol. The researchers also believe that the funeral menu included goat, lamb and lentil stew. With funerals like that, baptisms are removed.

8) A romantic dinner of 15 million euros. Love moves mountains, they say. We do not know if this is true, but it certainly does seem that the sentiment most sung by poets and minstrels of all time is capable of motivating good agapes. One of the best known is the one that offered Cleopatra a Marco Antonio Back in the XNUMXst century BC, after they both fell passionately in love.

Apparently driven by passion The Egyptian queen bet on Marco Antonio that he was able to dispatch with his lover a dinner of ten million sesterces, which, according to historians, would be around 15 million euros today. Marco Antonio accepted the challenge.

Apparently dinner was nothing to write home about, but the surprise came with dessert. Cleopatra wore two thick pearls around five million sesterces each around her neck, in the opinion of a certain Planco, chosen as judge for the challenge. Then, Cleopatra put one of them into a glass with vinegar, which caused its dissolution, and immediately afterwards she threw it in the throat. When he was going to do the same with the second, Marco Antonio gave up.

9) The oldest slaughter. It is true that the Cave of Altamira, the best expression of rock art that has survived to this day, does not represent a banquet. If we include it in this list, it is because it reflects precisely the anteroom of one of the oldest agapes of which we have reference, although indirectly. Can it be doubted that the bison hunting scene that is so beautifully painted on the ceiling of Altamira, dated 15.000 years ago, was not followed by a meat feast that shook the mystery among our prehistoric ancestors? Is it possible to disconnect the emotion of the moment of hunting or fishing from the moment in which the collected piece ends up in our jaws?

10) First diner in space. It is known that, although the Americans were the first to reach the Moon, the first successes in the space race fell on the Soviet side. Thus, if Yuri Gagarin was the first man to orbit the globe and go out into space, his compatriot German Titov, who flew on August 6, 1961 aboard Vostok 2, was the first man to eat outside of our beloved Earth.. Laying the foundation for his companions in the future, Titov's menu was rather frugal, and consisted of a vegetable cream, a can of liver paste and redcurrant juice.

The commitment to light food has since then remained the general trend beyond our atmosphere and thus, despite all that the space adventure has advanced in recent decades, it is still to come the one that puts between his chest and back a good roast suckling burgalés (for example); surely in that case the problems with the absence of gravity would be minor.

The 12 most ridiculous restaurant challenges in the world

Pharmacology of caffeine: Effects of caffeine on the central nervous system