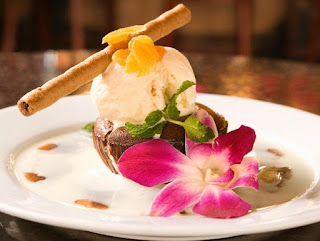 The flowers are used in the kitchen from time immemorial in cultures such as the Hindu or the Greek, which is not surprising since, in addition to a pleasant taste and smell, they give dishes an invaluable beauty that makes them more attractive.

Since Laura Esquivel told about it in the book titled “Como agua para chocolate”And Alfonso Arau (film director and then the writer's husband) showed it on the screens, the rose petals have become much more appetizing than they had ever seemed.

However, it is necessary to be very careful and to be clear that the flowers, in general, cannot be eaten. And much less the flower shops, which almost always have pesticides. If you have to be more than prudent in these cases, perhaps it would be good if you lost the fear of using those that can be purchased in specialized stores.

The flowers are not, as it might seem at first, a stranger ingredients which is only used in exotic places. On the contrary, they are used much more than is believed. And it is that many aromatic plants have edible flowers that, in addition to providing the dishes with a beautiful decoration, endow them with an extraordinary aroma and flavor that, on many occasions, are increased if they are properly combined with their leaves.

Flowers were used as a garnish from time immemorial when they were not a culinary eccentricity, but were part of the normal diet of people with money. A good example of this are marigolds, which were highly valued in ancient times for their edible qualities in India, Greece and some Arab countries. With a somewhat bitter taste, marigold was used, along with the leaves, to perfume in potions, broths and beverages.

Similarly, roses appear frequently in ancient cookbooks. They made preserves of roses, buds in vinegar, tartlets and rosehip sauces. Its pleasant aroma, its enormous beauty and its sweet flavor continue to make it an attractive ingredient. Today they are frequently used in salads accompanied by fruit. In that case, the white ends of the base should be removed, rinsed with water and dried. The more scented the roses, the more flavor and smell they will leave on the plate.

Another of the most used since ancient times is nasturtium, also called queen taco, which in the sixteenth century was imported into Europe from Peru. The plant can be used to use between stoves, in addition to flowers, leaves and buttons. Due to its somewhat spicy flavor, at first they were called watercress from the Indies. They are used in salads and combine very well with parsley, tarragon, pimpernel and onions.

It may interest you:  Curious kitchen utensils that will make your life easier

Also salad Violets are very rich and combine particularly well with endives. In addition, they are very suitable as a filling for tortillas, as well as a garnish for cold soups. Mild flavor and delicateThey can be consumed fresh, dry and candied. In any of its ways this flower is very decorative. More multifunctional is the lavender flower, which like it can be added to rabbit, chicken and rice, is used to make ice cream and other sweets.

As for the conservation of the flowers, most of them can be kept in the refrigerator, where they hold fresh and in perfect condition for a week. It is important to buy them shortly before use, since the fresher they are, the better they will retain their flavor and aroma.

What is the difference between a pot and a frying pan? -2021