In December 2007 the article published in the magazine Efficient de Restaurants The authorship of the consultant Francisco Álvarez served as a guide to project the budgets of a restaurant that almost declared bankruptcy due to poor sales projections, costs and income. Today, I address this topic, 4 years later, not to enrich, but as a whole team that we are the collaborators of Efficient de Restaurants, share ideas.

They…. they have their history

Yes, the budgets are not instruments that are born in modernity, but they begin to make modernity. Its origins date back to the end of the XNUMXth century when the kingdom's spending plans were presented to the British Parliament and the guidelines for their execution and control were established. Etymologically it is derived from Old French  Bougette or stock market, whose meaning was later tried to be perfected in the English system with the term Budget of common knowledge and that today we know as a budget.
After the First World War, just as the industrial sector began to grow, the private sector perceived that the control of expenses through budgets allowed to obtain higher performance margins during the different operating cycles and began to use it as an instrument of control and management in the companies.

To drink strategic it is necessary to know what we want to achieve and what we have for it. Of course, so that each task that is associated with the aspirations of the organization can be fulfilled, it is necessary to have the necessary information, which after being collected, examined and verified its veracity will allow each of them to be properly formulated. , and thus contribute to a more efficient use of available human, financial and technological resources.
In this sense, planning comes to constitute an essential function in the entire management process of the company, whose fundamental contribution comes from the very fact that it allows you to orient yourself towards those future goals and become an important trigger, together with rest of the functions that make up the management cycle, in order to carry out, at the appropriate time, the adjustments or eliminate tasks that require it, also allowing each action to be carried out to be evaluated based on what is actually performed. Has made.
The above shows the role that planning plays in the success of any organization, showing that to be efficient it must be flexible, that is, capable of adapting to the changes that are identified between what has been planned and what has been planned. it is really happening; in the same way, it must involve all those involved in the process as an element that contributes to its fulfillment and commitment, and finally, it must be inclusive, which means that all the partitioned plans must be directed towards a general objective so that deviations do not occur and stop being useful.
It then corresponds to the administration be concerned with setting goals or norms for financial achievement, generally through a planned budget, with knowing what is being achieved, through a system of records that provide pertinent information on current operations, preparing the information through daily, monthly and annual that compose the current achievements with the standards and finally, carry out the correct measures to ensure that the operations are in harmony with the goals set.

What is a budget?

The literature on the subject is abundant, and although each author defines it according to his own label, all these definitions converge with that offered by the Royal Spanish Academy that it is the anticipated computation of the cost of a work or of the expenses and rents of a corporation (RAE).
However, in the intense search for information to enrich the present, I was very attracted to the one offered by José Ignacio Antón in his presentation entitled "Budget. The classical formulation and its crisis", Where he very masterfully states that it is the"systematic summary, prepared in regular periods of time and approved by the competent collegiate body, which establishes the forecasts of expenses and income by a member of the public sector, in order to meet its economic action plan, in such a way that its acceptance implies, implicitly, a renewed confidence in the managers of this component of the public sector"
After the above, it is evident that talking about budgets implies talking about the basis for success. An organization that does not project its income and plan its expenses will navigate the sea of ​​adrift competition. He comes to constitute, more than a statement of income and expenses, the photograph of the aspirations of profitability of the organization, detailing, defining and individualizing the participation of each area of ​​responsibility and how they contribute to its objectives and thus be able to perform comprehensive analyzes of the management in the periods of time that are selected.

To elaborate or project the financial budget of an organization is not only to distribute the money by items, but from it, the different paths to success begin to be traced. For a budget to adequately respond to the organization's objectives, the entity's particularities must first be known in detail, focusing on its strengths and opportunities and its threats and weaknesses.
Likewise, the budget time period must be set; generally the organizations They do it for a fiscal year, but it does not necessarily have to be that time, but they can be set according to the characteristics and interests of the organization itself, but always aware that it must be known to all those involved in its execution , because they will be the ones who will ensure that deviations or misuse of them do not occur so that internal competitions of these do not occur with their own administration, since its execution is not automatic and limits decision-making.

Preparation of the budget.

In a service entity such as restaurantsThe first thing that is needed is to know the carrying capacity of the same, in order to estimate the occupation according to the historical data (if they exist).
Once you have this information, the administration You will be in a position to prepare a sales budget and from it establish the cost and expense budgets and thereby obtain the forecast results in the Income Statement, the cash or cash flow and the budgeted Balance Sheet.

On how to calculate the sales budget there have been several theoriesOne of them is the proposal based on the scientific method by the North Americans Walter Rauntestrauch and Raymod Viller in their work "Budgetary Control", whose work was later criticized, but without a solution proposal, by the Mexican Cristóbal del Río González in his book "The budget." However, both agree that indicators such as:
And although the above seems a bit complex, I can tell you that calculating sales budgets can be simplified if you have the right information. In my opinion there are three data that cannot be ignored:

Now, disaggregate these data as appropriate, for example

The previous example informs us of the average sales by clients according to each of the items, which will serve as the basis for applying the corresponding adjustment and determining the sales plan for the next period.
For this, all those factors, both internal and external, that may exert some influence on the organization must be taken into account, and very important, if there are historical ones, to evaluate the growth or decrease behavior in previous years, some elements to consider as Examples would be the following:

You as administrator will determine in what percentage the company is in a position to increase or decrease the sales plans for the following period. For the example above I will apply a growth rate of 2%.

Once sales are projected, the facility is in a position to project its costs. It is important that the administrator takes into account those percentages at which he plans to operate. In the previous example, if the calculations are made, we will obtain that the installation worked at 38% the cost of food and 27% that of beverages, which are the fundamental indicators of the installation, as well as planned that the other two items only they will cost 10% of what you will enter.
Thus, the costs projected according to plan in the previous period, were as follows:

Taking into account the above, and considering that the calculated averages show that the behavior of costs has been based on 35% for food and 25% for beverages and that the rest of the items round off 10% of their income, the projection of costs in relation to the previous year would be as follows. For this, 35% was applied to the projected income from food and 25% to the projected income from beverages, keeping 10% for the rest of the items, remaining as follows:

Once these values ​​are obtained, the income and cost budget can be composed as follows: 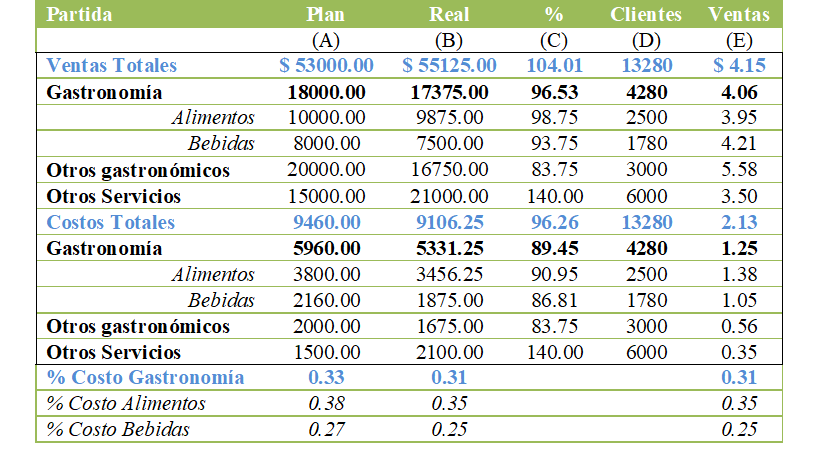 The table above shows us the projection of an income and cost budget for a gastronomic facility. But this is just the beginning of a whole process. They must also be estimated, following a comparison procedure and adjusting to the plans of the company the expenses that will be incurred, for example:

Tips for the restaurant manager.

By way of closing, still unsatisfied, I leave you, from my humble opinion, some tips related to this topic and that will make the objective of your budget effective and facilitate its control:

How to advertise your restaurant for free? - 2021

How to write a crisis management plan for your restaurant? - 2021