The Guinness record celebrate the biggest, heaviest, tallest, most durable and many other "tops" of the world. On this occasion, let's look at some of the feats related to food more impressive. As a curious note, the first three records are Venezuelans

1. The largest arepa in the world: Collectively, the Harina PAN brand (Caracas, Venezuela) celebrated its 50 years preparing it in 2011. Its weight was 493 kilos.
2. Ice cream parlor with more flavors: The Coromoto ice cream parlor, in Mérida, has more than 800 flavors and is the one with the widest variety in the world.
3. Largest find in the world: With a length of 180 meters, a team of 300 cooks prepared it in 4 hours in the state of Lara (Venezuela).
4. The biggest bubble gum: Chad Fell (USA) blew a 50,8 cm. in diameter, without helping with hands at Double Springs High School, Alabama, in 2004.
5. Faster to carve a ton of pumpkins: Stephen Clarke carved a ton of pumpkins for Halloween on October 29, 2008, in 3 hours, 33 minutes, and 49 seconds, in Atlantic City (USA).
6. More milk milked in 2 minutes: Gunther Wahl (Germany) obtained 2 liters of milk in 2008, in the traditional way.
7. The most expensive caviar: Souls, obtained from albino sturgeons in the Iranian Caspian Sea, is sold for 34 thousand dollars per kilo.
8. The biggest salad: In Crete (Greece) a tomato, cucumber, bell pepper, feta, olive oil, oregano and salt salad was made in 2010. It was made by 600 volunteers and weighed 13 kilos.
9. The largest food fair: In Cairo (Egypt) is Oasis restaurants and Entertainment, with 41.000 m2. Only 25 stores, but it has capacity for more than 4 thousand people.
10. Restaurant oldest: Nephew of Botin, located in the heart of Madrid, is a typical restaurant Spanish, open since 1725. It is visited by tourists and locals, including the King of Spain.
FOOD RECORDS

It may interest you:  19 movies that talk about gastronomy and that you must see

On August 2, Erica Holmes-Attivor from Guinness World Records visited Spain to verify the record of the largest gazpacho in the world. Said Gazpacho was created by the municipality of Campohermoso in Nijar, Almería. This was not the first time that the province of Almería had attempted to break a Guinness World Record, since the largest electronic darts tournament was in Aguadulce and the youngest lion tamer resides in El Ejido.

The preparation of this great gazpacho took more than five hours but in the end, Ms. Holmes-Attivor confirmed that there were 4,520 liters of gazpacho, which established a new Guinness World Record.The Longest Roast

April 13, 2008 - Montevideo, Uruguay. Ambition, organization, creativity - and of course, a lot of meat - were the perfect ingredients of the Uruguayan recipe to achieve a Guinness World Record. The longest barbecue in the world, or in the Uruguayan style - "The Largest Roast In The World", measures 1493.2 meters ... incredible! The barbecue was created in the shape of a star, and located in the "Rural del Prado": a rodeo located in the center of a public park in Montevideo.

On January 25, in Mexico City, Kraft Foods Mexico's Philadelphia was recognized by Guinness World Records for preparing the largest cheesecake in history.

Weighing 2,133.5 Kg (4,703 lbs), 2.5 meters in diameter and 56 cm. high, a team of 55 Mexican chefs from 5 of the most recognized gastronomy universities in Mexico and led by chefs Elí López and Miguel Ángel Quezada, achieved this feat at the University of the Cloister of Sor Juana, located in the Historic Center of Mexico City.

It may interest you:  Where do the best chefs in the world study?

With the precision of a surgeon, the young man cut the long piece of bread in front of him. After this, and with much patience, I insert the 114 meters of a single sausage into the bread. This "operation" was concluded with a few passes with mustard throughout the creation. With this, the Ponderosa Packer set a new Guinness World Record for the longest dog / hot dog.

THE BAKERS OF MONTERREY, IN THE NORTH OF MEXICO, BROUGHT THE RECORD GUINNESS OF THE LARGEST THREAD OF KINGS IN THE WORLD, WHEN DRAWING ONE THAT MEASURED 3,4 KILOMETERS. THE MAYOR OF THE CITY, FELIPE DE JESÚS CANTÚ, REPORTED THAT THE SIZE OF THE THREAD, WHICH HAD NO ROUND FORM, BUT EASIER TO MEASURE AND PREPARE, THE THREAD WEIGHTED MORE THAN 4 TONS AND IN ITS MANUFACTURING USED 18.000 HUEVES KILOS OF FLOUR, 2.800 KILOS OF BUTTER, 500 KILOS OF VEGETABLE BUTTER AND 500 KILOS OF SUGAR, AMONG OTHER INGREDIENTS. PARTICIPATING IN ITS ELABORATION THIRTY BAKERS AND TOO HIGH INSIDE THERE WERE 800 FIGURES THAT SIMULATE THE CHILD JESUS ​​AS SURPRISESThe largest hamburger in the world

TO THE OWNERS OF A LOCAL CALLED DENNY'S BEER BARREL PUB IN CLEARFIELD, IN THE STATE OF PENNSYLVANIA, THEY LOOKED LITTLE THE 105 POUNDS OF HAMBURGER THAT WAS THE LAST RECORD IN THE WORLD WITH A TIME OF 123, POUNDS (ALMOST 56 KILOS). THE HAMBURGER CONTAINS 80 POUNDS OF MEAT, 30 POUNDS OF BREAD, 12 TOMATOES, 160 SLICES OF CHEESE, MUSTARD, KETCHUP, MAYONNAISE, LETTUCE AND ONION AMONG ITS INGREDIENTS. THE HAMBURGER WITH A PRICE OF 379 DOLLARS WILL BE SOLD IN A CHARITY EVENT AND THE LOCAL HAS ALREADY COMPLETED THE NECESSARY INFORMATION TO OBTAIN THE RECORD GUINNESS AS THE LARGEST IN THE WORLD

It may interest you:  10 ways the Noma restaurant in Copenhagen forever changed the world of food 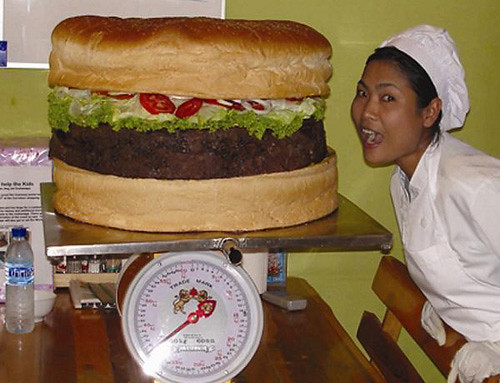 The 12 most expensive dishes in the world