General Approach to the Problem

El Insights Balance Point is a method of Financial planning, which is intended to project the level of net sales that a company needs, in order not to lose or win, in an economy with price stability, to take strategic and achieve objectives (Perdomo Moreno 2001).

The Balance Point or Break Point or Bankruptcy Point is the point where the amount of net sales absorbs the costs variable and fixed costs, that is, it is the economic moment where there is a balance between income and total costs, at which point it has stopped losing and no profit has begun.

However, we have never asked ourselves if this technique takes into consideration or is implicit in it the fact that, once the equilibrium point has been determined, the productive or service operation is carried out with the required efficiency, defining this concept as it is presented. the 1987 Santander dictionary, namely: ¨ Term that expresses the relationship actually obtained between a certain application of means, measured as expenses and a certain effect, measured as a result ¨.

To exemplify the above, let's look at the following example: Suppose a Restaurant with a capacity of 20 tables (80 clients) and that there is an average monthly sale of 30 pesos, in which period 000.00 tables are occupied. The cost The fixed cost of the installation is about 5 pesos per month and the variable cost reaches 000.00 pesos each month. The question to answer is: What should be the percent of occupation of the Restaurant to reach the Balance Point?

The application of the Equilibrium Point technique is presented below, as well as the Income Statement that is prepared from the resulting information.

El Contribution Margin or Unit Margin, is the part of the price that is not consumed by the unit variable costs and therefore remains to cover the fixed costs.

Substituting the values ​​in the formula, we will obtain:

The literature on the subject would tell us that: from a sales level of over 12 pesos, the restaurant You will get profit, this means that with only 42% of current sales the break-even point would be reached.

So far, everything seems to be going smoothly, that is, satisfactorily, since current sales exceed those of the equilibrium point by about 17 pesos, maintaining the correspondence of variable costs with sales.

But this result is well worth a Insights more detailed. In effect, according to the initial data, the variable cost per sales weight (18 / 000.00) is 30 cents and the same magnitude remains after calculating the Balance Point (000.00 / 60 = 7). Suppose the forecast were 500.00 cents, then, the question that comes to mind is: Will the same level of equilibrium sale be maintained if the operation had been carried out with the expected level of efficiency?

The companies that use the partial cost method only distribute certain categories of costs, the rest not distributed are considered expenses for the year and are taken directly to the income statement. Within this category two methods can be distinguished:

The advantage of partial methods lies in their simplicity, although the information they provide is of lower quality than that offered by the total cost method (they distribute all the company's costs among the products).

Partial cost methods are suitable for those companies in which the imputed costs, whether direct or variable, represent the main part of the expenses.

El Insights break-even point is applicable to any of the divisions or units of the organization that have duly differentiated costs. It is, therefore, an indispensable requirement the definition of which are the fixed costs and the variable costs of the organization in question, which often do not do the same, since they do not request the information in this way.

Sometimes, and in some cases, it is difficult to establish an exact dividing line between these costs, in which case it is necessary to apply specific methods to separate them.

The literature on the subject establishes three variants for determining the Balance Point:

This variant arises because in most organizations, they offer a diversity of products and services, and therefore, the Balance Point is formulated in terms of value and not in physical units.

For this, it is required to calculate the Contribution Margin index, which is the quotient of the Total Variable Cost between the Net Sales.

This index should be updated frequently, whenever major changes in these factors occur. 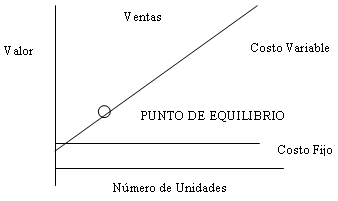 As a rule, the cases presented in the consulted literature indicate the determination of the Balance Point in an ongoing organization, however, it is known that prior to the execution of any type of investment, they are made Insights feasibility of the same, in order to have an idea of ​​how the business should be developed.

In any case, whether it is a future or current business, its operations must be carried out with the expected efficiency.

Operations Efficiency. What we all want

Operating efficiently is the desire that every entrepreneur aspires to for their organization, reaching this category is sometimes a headache, due to the various factors that may affect it.

Although there are different definitions of efficiency, in any case the purpose is to achieve the effect you want using the best possible means.

Notwithstanding the foregoing, this definition still seems somewhat ambiguous and entrepreneurs need a practical tool that allows them, with a high degree of accuracy, to ensure that their business operations are carried out strictly using the necessary resources (costs).

The aforementioned leads us to the need to establish comparative parameters that indicate the course to be taken by the operations of the company, taking into account the installed technology, so that these operations are executed efficiently. To achieve this purpose, three comparison elements can be used:

Let's look at an example that allows a better understanding of what operations efficiency means. It is a retail entity that sells food and non-alcoholic beverages, it operates 365 days a year during rotating hours, from 10:00 am to 12:00 at night.

The main economic results of the establishment can be synthesized in the indicators presented in table 1. and which comprise the first half of the current period. The data in values ​​are expressed in thousands of pesos.

A preliminary analysis of the previous table ensures that the establishment did not operate with the required efficiency, both with respect to the same period of the previous year and in relation to the budget.

In the first case, the same period of the previous year, it can be seen that, although sales increased by 1,3%, both increases in variable costs, 3,3%, and in fixed costs, 6,7%, exceed that of sales and as a consequence, profits fell by 4,5%.

Compared to what was budgeted, a similar situation can be seen, aggravated by the fact that the establishment in question did not achieve the goal of net sales that was proposed.

On the other hand, practice shows that managers sometimes hide the inefficiency of their businesses by reaching high sales volumes.

This procedure can sometimes contribute to resource deviations, this occurs particularly in entities that the owner is not the one who directly manages the business, or because the person the owner trusts does not demonstrate the necessary knowledge or does not possess the Ethical and moral principles that are required for the position, on this there is a lot of fabric to cut, but it is not the subject of this article.

Returning to the main objective, we determine for the initial example of this work the efficiency of the operations of the establishment and next, we analyze the relationship between the equilibrium point and the efficiency.

Table 2. shows a summary of the Income Statement as budgeted and actual execution, which constitute the initial data from the example developed in the introduction to this work.

Table 2. Comparison of the budget with the actual execution in selected indicators of the Income Statement.

In Table 2., it can be seen that, despite the fact that the sales budget has been met, the profits only reach 70.0% of the forecast, that is, the establishment does not operate with the expected efficiency. In this situation, the overdraft on variable costs has a negative impact on 26,3% of the budget.

The increase in variable costs may be motivated by some of the factors or a combination of several that are presented below:

It could also occur, although it does not happen in this case, increases in the fixed cost / sale ratio, which may be the product of the factors described below, or a combination of them:

So far, the efficiency of operations, now we have to observe what happens with efficiency when determining the equilibrium point with the budgeted data and the actual information, information that appears in Table 3.

Table 3. Comparison of the results of applying the Equilibrium Point technique to the budgeted data and actual execution.

As seen in table 3. , the break-even point determined from the budgeted data is lower than that obtained with the actual execution. In addition, the Equilibrium Point transfers the inefficiency that real execution presents, that is, if the variable cost / sale was 60 cents, the same magnitude is maintained when calculating variable cost equilibrium / equilibrium point.

This is easy to understand if we take into account that the Equilibrium Point only seeks to find the level of sale necessary to cover variable and structural costs, maintaining the correspondence between costs and sale. The graph below shows the Break-even Point based on budgeted data and actual execution. 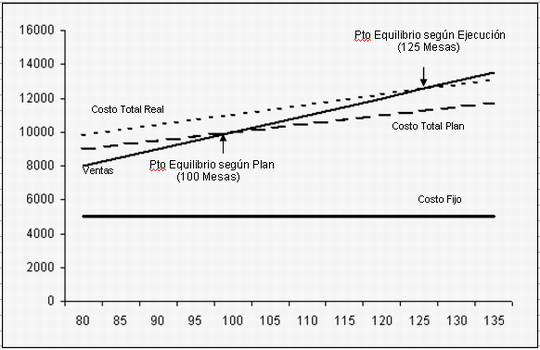 The previous results provide us with two important elements, namely:

The immediate question that arises: What can be done then so that when determining the Balance Point, it is sustained in an operation with efficiency? One possibility is the application of the following formula:

The previous expression is known as the Offset Balance Point, since it provides for a certain level of utility.

If we apply this formula to our example, we will have:

In other words, the sales necessary to obtain 10 pesos in profit must be of the order of 000.00, that is, 37 pesos more than the current sales execution. If this result is analyzed, in terms of units (tables), then the Balance Point will be 500.00 tables, that is, 7 more than those that were executed.

However, it will be seen that even if the budgeted profits are reached, this is a consequence of a high increase in income, since the efficiency index, measured through the variable cost / sale ratio remains at 60 cents, higher than the expected figure.

The previous arguments lead us to assert that if the operations are not carried out efficiently, then the Displaced Equilibrium Point, even when it allows the expected profits to be reached, does not affect the efficiency of the business operations.

Control of costs and margins in banquets. (2020)

How to forecast the demand in this 2020